Established in April 2008, SM Hotels and Conventions Corporation (SMHCC) is guided by its mission to be the leading hotel and convention company in the Philippines and its vision to build and operate hote;s and convention centers that take pride in Filipino warmth and hospitality. The SMHCC portfolio is comprised of eight hotel properties and over 38,000 square meters of convetion space. 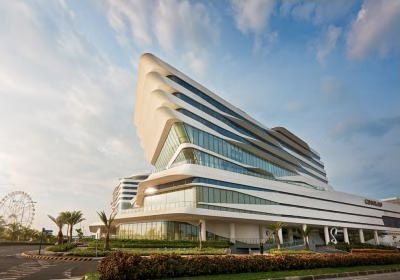 Park Inn by Radisson, the feel-good brand from Radisson Hotel Group, continues to delight hotel owners and guests in Asia Pacific with its stress-free experiences, laid-back charm and vibrant contemporary design. This colorful upper midscale concept exudes positivity through its “Yes I Can!” service ethos, and the brand’s upbeat attitude is now also being reflected by its rapid regional growth.

In the Philippines, Park Inn by Radisson Clark has opened its all-new South Wing, adding more accommodation options for domestic and international guests in an up-and-coming destination. This vibrant multiple-use hotel has increased its inventory by 65% with the addition of 100 new rooms and suites, in line with a projected rise in passenger traffic at Clark International Airport, which is located just 10 minutes’ drive away.

Upon opening, the new 100-room South Wing will accommodate all business guests, who will be able to use the hotel’s outdoor pool, well-equipped fitness center, HUES all-day restaurant, lobby lounge and “grab & go” snack zone. Three meeting rooms are available for corporate guests, and those looking forward to retail therapy will enjoy instant access to the SM City Clark shopping mall, which is located next door.

Park Inn by Radisson Clark, which was recently awarded the Tripadvisor Travelers’ Choice Award for the fifth year in a row, has become an important hotel for Filipinos who need to quarantine when they return to their home country. The existing 154-key North Wing will continue to accommodate Overseas Filipino Workers (OFWs) and Returning Overseas Filipinos (ROFs). The hotel has been SGS certified and adheres strictly to the Radisson Hotels Safety Protocol, and quarantining guests will not be able to access the hotel’s public areas and facilities. This multiple-use flexibility will provide greater options for guests, support the nationwide COVID-19 strategy and drive additional benefits to its owners.

“The unveiling of the new South Wing at Park Inn by Radisson Clark will enhance our ability to create exceptional, upbeat guest experiences. At Radisson Hotel Group, we appreciate the strong, long-standing relationships we have with our owners in the Philippines. SM Hotels and Conventions Corp. (SMHCC) has been instrumental in the roll-out of Park Inn by Radisson’s new brand positioning and we look forward to continuing our relationship with them in future,” said Andre de Jong, Vice President, Operations, South East Asia and Pacific, Radisson Hotel Group.

“We have been privileged to host quarantining guests in recent months. The launch of our new South Wing will now enhance our ability to operate as a multiple-use hotel, catering to the needs of business travelers and returning Filipinos. With new domestic and international passenger terminals scheduled to open at Clark International Airport this year, our expansion will help us to cater for rising demand in all sectors of the market,” added Ann Olalo, General Manager, Park Inn by Radisson Clark.

“The opening of Park Inn by Radisson Clark’s South Wing is a manifestation of SMHCC’s optimistic outlook and confidence in the hospitality industry. Nestled in an unmatched location within SM’s integrated mixed-use development, alongside the upcoming SMX Convention Center Clark, the hotel is poised to cement its position as a key player in Central Luzon’s tourism and MICE sectors,” SMHCC Executive Vice President Peggy E. Angeles further stated. Park Inn by Radisson has captured the imagination of hotel guests in the Philippines. With four hotels now operating and one more – Park Inn by Radisson Bacolod – in the pipeline, thousands of Filipino and international travelers are enjoying the brand’s upbeat vibe, all across the country.